While some off-roaders argue that the all-electric Polaris Ranger XP Kinetic is nothing more than a machine for city people pretending to be country, others are generally excited about the trajectory of industry, stating that they’d consider getting an electric UTV if the price was right. From a business perspective, it was smart of Polaris to jump out ahead and set the bar for other manufacturers. And besides, it was about time for a refresh of the existing Polaris Ranger EV anyways. There’s no doubt that ample room still exists for improvement when it comes to range and affordability, but Polaris has come a long way with their electric Rangers, and this is typified in the 2023 Polaris Ranger Kinetic. But what’s all the buzz about? Settle in, because we’re gonna tell you all about it right now! 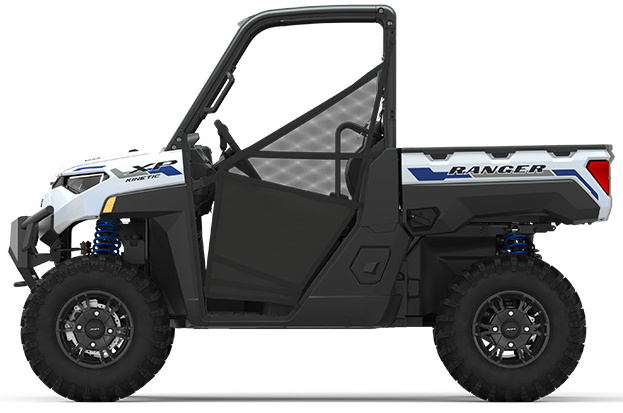 Pros Of The Polaris Ranger Kinetic 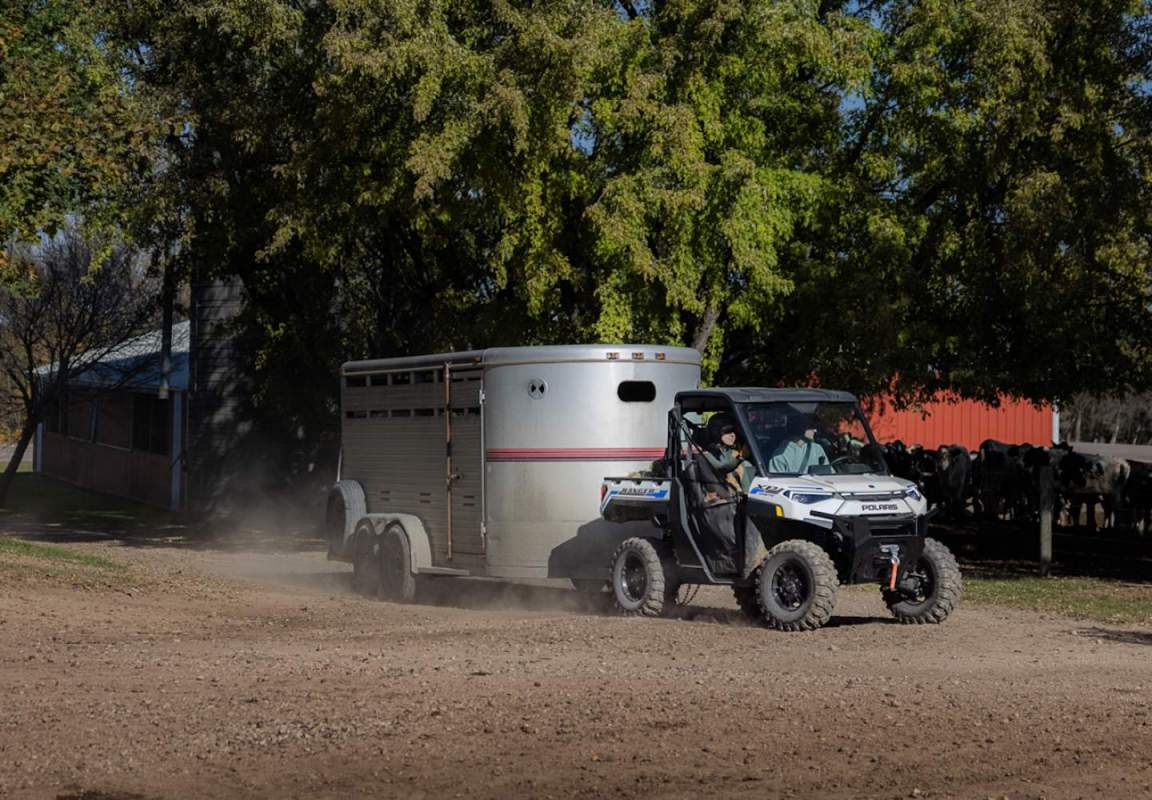 Both editions of the Polaris Ranger Kinetic (the Ultimate and the Premium) are powered by internal permanent magnet AC motors that are capable of generating 110 Horsepower and 140 Foot-Pounds of torque. Electric motors are notorious for their ability to create massive amounts of torque, which makes pulling heavy loads and spinning large aftermarket tires a complete walk in the park!

In addition to being torque monsters, electric vehicles like the Kinetic Ranger are also stealthy. Because they don’t have engines or exhausts, there are no loud engine / exhaust noises produced by electric UTVs. This makes them great for riding around neighborhoods with noise restrictions, and even better for sneaking up on prey when hunting!

Electric Polaris Rangers are already being used in industries like mining, where it’s not a good idea to generate noxious exhaust fumes. Be it to use on a coal mine deep underground, or indoors for large sporting events, the Ranger Kinetic does prove useful for a variety of industrial applications. But the question remains, why not just get an electric golf cart?

Breaking stuff is the name of the game in off-roading, and as one might imagine, repairing an electric Polaris Ranger is just as expensive as doing work on the gas-powered Rangers. But low and behold, the Polaris Ranger Kinetic batteries come with a 5-year warranty, while the rest of the powertrain is covered for 3 years. For people who are skeptical about the reliability / durability of Polaris UTVs, this should be a positive sign!

Cons Of The Polaris Ranger Kinetic 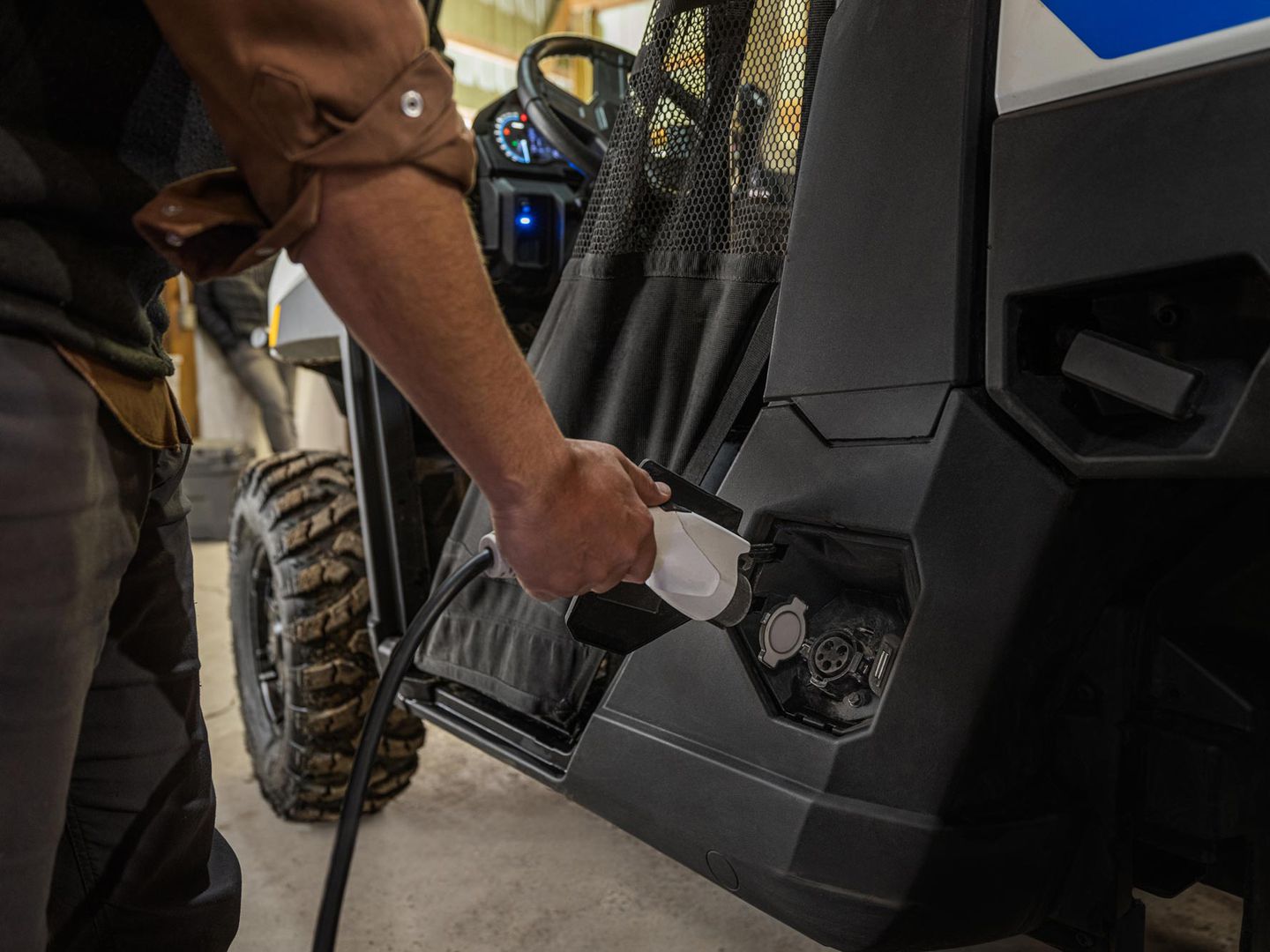 The cost of a Polaris Ranger Kinetic is significantly higher than most other Ranger editions, which makes it unaffordable for riders with lower buggy budgets. Nevertheless, government subsidies, rebates, and / or tax exemptions could apply, thereby reducing the net cost that you end up paying. Still, at $25,000 and $30,000 for the Kinetic Premium and Kinetic Ultimate respectively, even a $5,000-$10,000 EV credit might still be insufficient. Bottom line, the 2023 Polaris Ranger Kinetic isn’t cheap. But as Polaris continues to invest in R&D for their electric lineup, the prices have nowhere to go but down!

Cost aside, having a limited range is the most obvious drawback of owning a battery-powered Polaris Ranger – be it the Ranger Kinetic or the Ranger EV. After all, how can you expect off-road vehicle parks to now run electric for charging stations? And what are the long-distance riders supposed to do, charge their batteries as they go with a gas-powered generator in the bed? While companies like Tesla and Rivian have begun rolling out charging stations at parks and campsites across the US, a key reason why many folks choose the off-road lifestyle is to escape it all and be able to ride, hunt, fish, and camp in peace without any signs of civilization.

Polaris claims that the Ranger Kinetic Premium and Ranger Kinetic Ultimate can go 45 miles and 80 miles on a single charge respectively. But when you factor in elevation gains as well as the weight of tools, gear, and supplies, this distance looks more like a best-case scenario in optimal conditions.

Although it is possible to charge the electric Polaris Ranger Kinetic with a standard 120V outlet, it requires double the charging time to do so. Using an everyday outlet from your house or garage, it would take roughly 10 hours to charge the batteries in a fully-drained Kinetic Premium, and 20 hours to charge the batteries in a fully-drained Kinetic Ultimate. These times are greatly reduced when charging with a 220V outlet, but it still takes 5 hours with the stock charging configuration. While it is possible to install a 6kW or 9kW on-board charging upgrade to improve charging times to around 3-3.5 hours, these only produce results when paired with 240V.

Many riders could care less about electric vehicles, and most riders value performance over everything else. So in order to convince people to switch to electric, the alternative must outperform an internal combustion engine in all aspects. It’s one thing to convert people to battery-powered tools and electric lawn mowers, but for the hardcore side-by-side gear heads out there, half the fun comes from that fact that they're riding atop a series of controlled explosions!

The biggest difference between the two Polaris Ranger Kinetic editions is range, and this is because the Ultimate comes with double the energy-storage capacity. Aside from the additional battery, the Ranger Kinetic ultimate also comes with a bunch of additional accessories / accessory upgrades.

Take the in-cab instrumentation as an example. The Premium includes a control system with analog dials with a 4-inch multi-color display, while the Ultimate comes with a 7" glove-touch display that generates information on range, charge, diagnostics, and so on. Additionally, the Polaris Ranger Kinetic Ultimate also comes with a radio, a temperature control system, a GPS unit, and a host of other features like plow mode and group ride that aren't found in the Kinetic Premium.

In places like California, you might be forced by law to buy electric-powered equipment like the Polaris Ranger Kinetic. Before 2025 comes, however, improvements will hopefully be made. If you can afford the price tag on the 2023 Polaris Ranger Kinetic (and it’s not already sold out), by all means get one! If not, though, have patience, because with time, the prices will fall.