Polaris Ranger batteries often go by unnoticed and overlooked… that is, until something goes wrong. An overworked battery may cause your stereo, lights, or winch to cut out, while a depleted battery could leave you stranded without enough juice to power your UTV’s starter. You’ll be lucky to get a year or two out of a cheap battery, and even the best batteries won’t last much longer than a decade. But no matter what you’re after in a Polaris Ranger battery – be it amp hours, longevity, or safety – here are the important bits that you should know about Polaris Ranger batteries and battery setups! 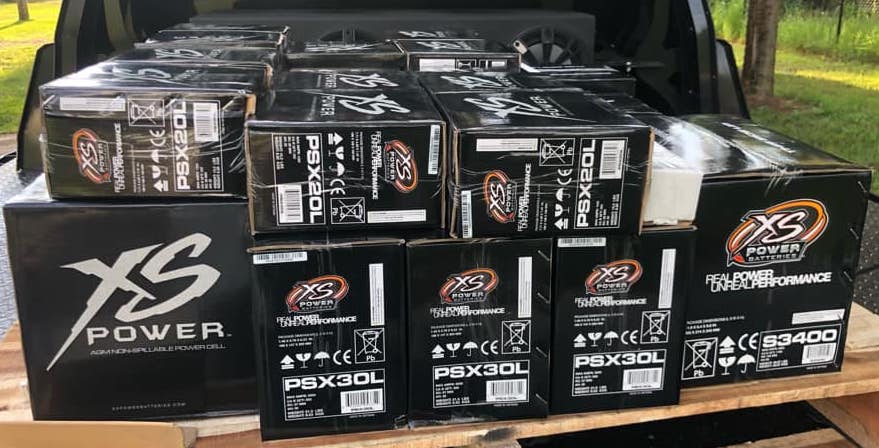 Whether you’re after a replacement battery for your Mid-Size Ranger, an upgraded battery for your Full-Size Ranger, or a secondary battery for your Ranger Crew, there are several battery options out there for riders to choose between, with some brands being far superior to others. You might want a battery with the exact same dimensions as the factory battery so that it fits effortlessly into the stock battery slot. But bolt-on Polaris Ranger battery trays as well as aftermarket battery straps / battery holders do exist, which grant users the flexibility to run batteries that are larger than the stock Polaris Ranger battery.

Lithium Iron Phosphate batteries (LiFePO4) are long-lasting, and so too are the batteries by Optima, Interstate, and Odyssey. With bigger-than-stock batteries, though, you might want to use a .50 filler plate under your new battery hold-down – just in case you want to switch back to a factory-size battery at some point in the future. You might also have to extend the ground wire to a 24” cable when adding a bigger battery. But with the right XS Power battery or Yuasa battery, you’ll get a direct-fit unit that you can slide in place, connect, and go! These high-quality AGM batteries pack a punch for their size, and you can get ones that are drop-in replacements for the OEM battery in your Ranger 900, Ranger XP 1000, or Ranger Crew! 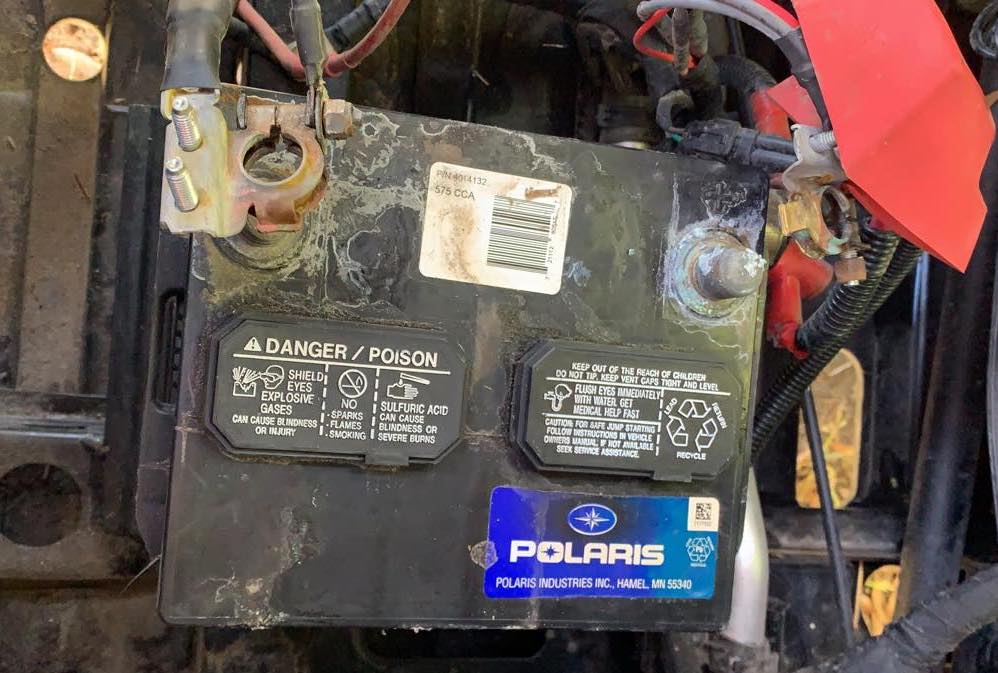 Aside from being maintenance-free and safe to use in any orientation, riders choose to go with AGM Polaris Ranger battery upgrades because they last longer than their lead-acid counterparts – in terms of both discharge rates / run times as well as overall longevity. Despite offering better performance, more safety features, and a longer lifespan than flooded lead-acid batteries, the major drawback of AGM batteries is their cost.

If you plan on selling your Ranger but first need a new battery to get it up and running, you might consider an OEM-style Polaris Ranger battery replacement to save a few bucks. Furthermore, if you’re experiencing electrical issues or have a draw demand that is greater than a single battery can fulfill, your problems will likely not be solved with an AGM battery alone. 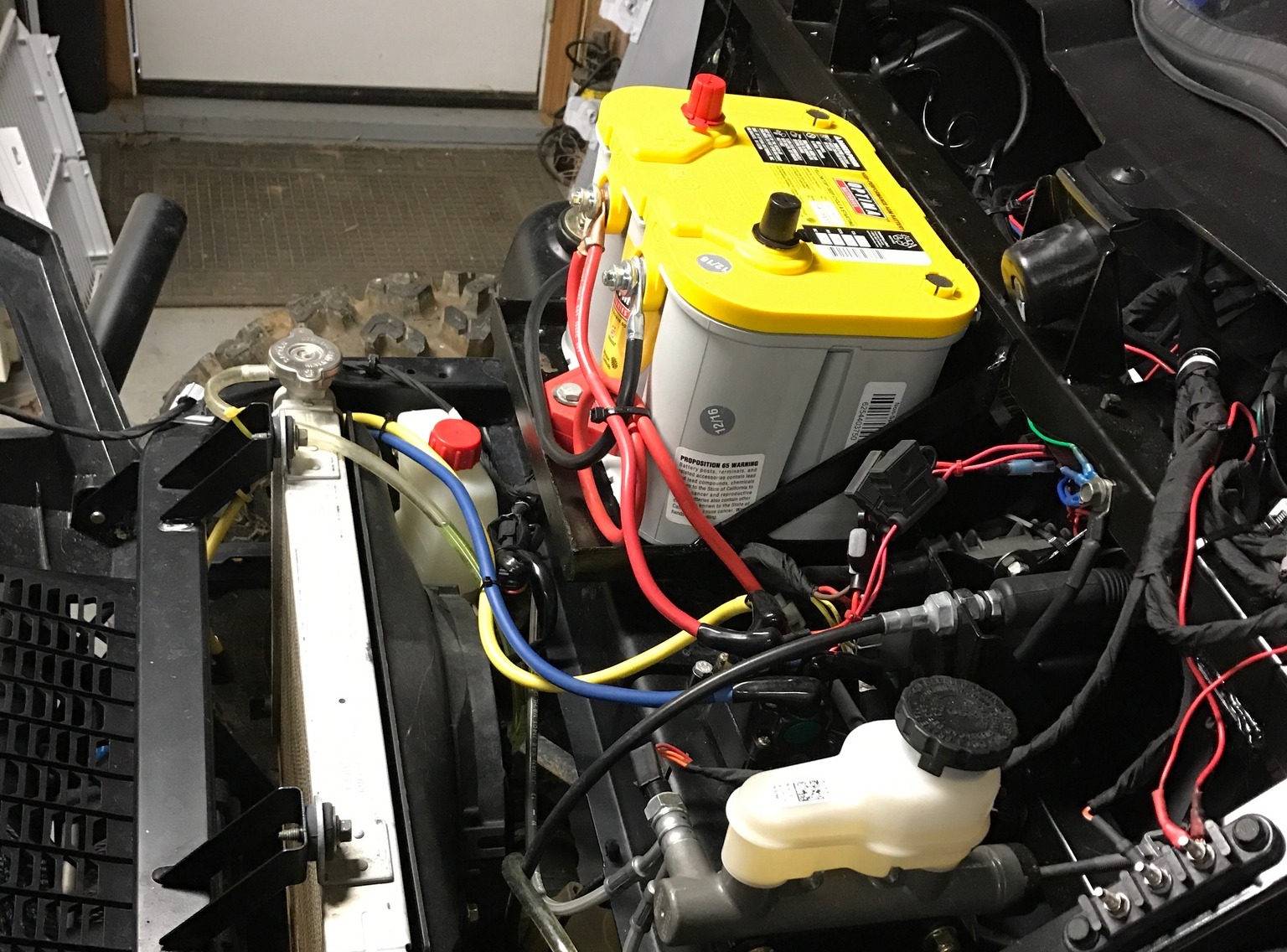 Unlike your standard AGM batteries, SLA batteries, or VRLA batteries, deep cycle batteries for the Polaris Ranger are designed in a way that is optimized for sustained, low-level power output – as opposed to quick bursts of high power. Deep cycle batteries can also be depleted to a greater extent than regular lead-acid batteries without becoming damaged, but they do take longer to charge back up because of this.

Aside from their slow charge rates, deep cycle batteries are also ill-suited for cold environments. The amount of cranking amps a deep cycle battery can produce becomes greatly diminished as the surrounding temperature drops. So because of this – as well as the slow recovery / recharge times of deep cycle batteries – may riders instead choose to go with dual battery setups in their Polaris Rangers. 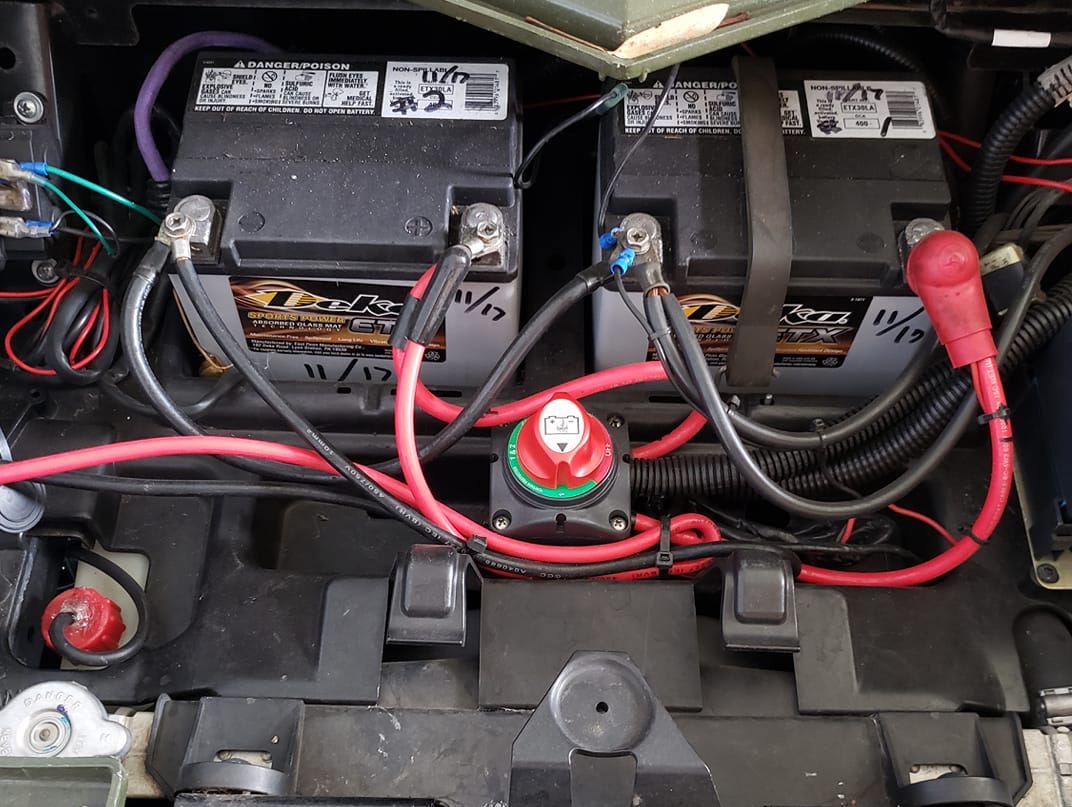 Bone-stock vehicles will usually be fine with a single battery. But if you’re running a winch, a cab heater, multiple light bars, and a stereo setup, you’re going to almost certainly require more battery capacity. Instead of installing bigger batteries when faced with more draw, many riders simply install a second battery.

There are various ways to wire in a secondary battery. You could run your batteries in parallel, or you could get a battery isolator that allows them to function separately, yet still charge together. If you choose to forego the isolator, make sure to avoid wiring your batteries in series. Parallel wiring will double the amp hours, while series wiring will double the voltage, which will likely cause something within the system to smoke / fry. 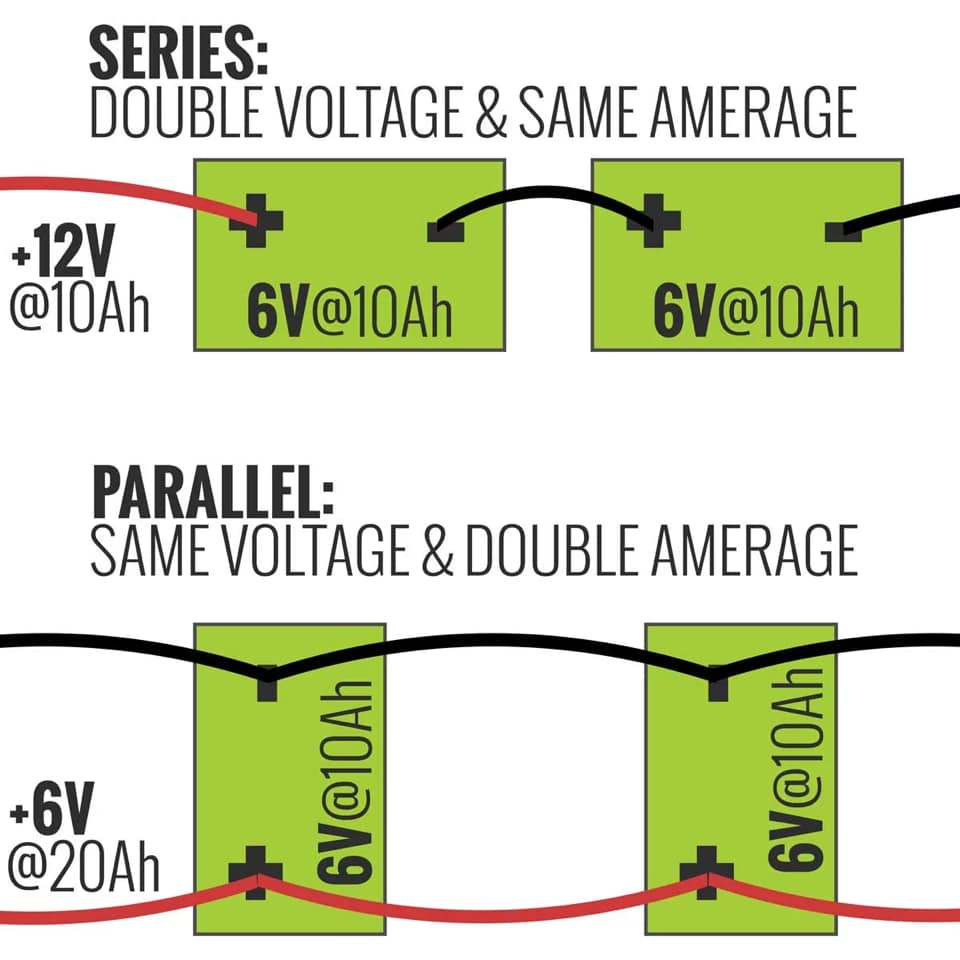 The rationale behind a Polaris Ranger dual battery kit is to provide more amp hours, to serve as cushion to the primary battery, and to prevent accidental battery drain that causes starting issues. Most riders reserve the main battery for starting the vehicle, and use a second battery (usually a deep cycle battery) to power their accessories. Some riders connect all their accessories to the “on” ignition side of a busbar so that nothing will receive power unless the key is in the ignition. But by wiring your stereo, lights, and other accessories to a secondary battery, you can run them when the vehicle is off without having to worry about maintaining enough charge to start the vehicle back up again.

It’s worth noting that all the capacity in the world will be useless if you can’t recharge your batteries. And while battery tenders / trickle chargers can be used when you have access to solar panels or the electrical grid, your vehicle’s charging system can take a while to top up two batteries. This can become increasingly problematic if you’re experiencing non-battery-related electrical issues. 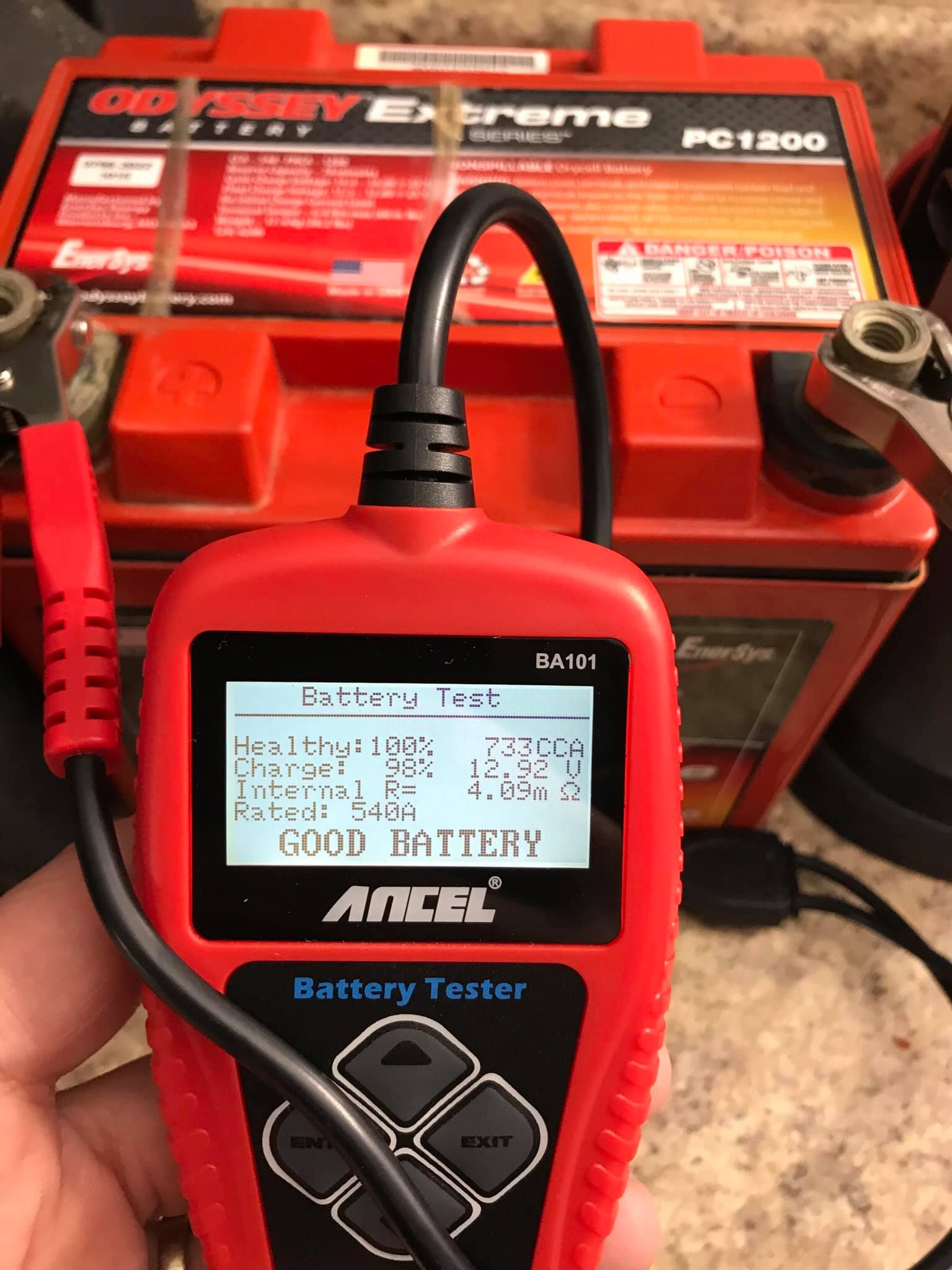 As we mentioned earlier, battery drain is a common issue that can arise if your accessories are not hooked up correctly, if you leave an accessory on accidentally, or if an accessory has a parasitic draw. Even if you wire all your aftermarket accessories to a secondary battery, it’ll still get depleted if you’re experiencing phantom drain in one form or another, which is where master power switches prove useful. With a top post battery disconnect switch, you’ll gain the ability to cut everything off from the battery so that it doesn’t become drained when not in use.